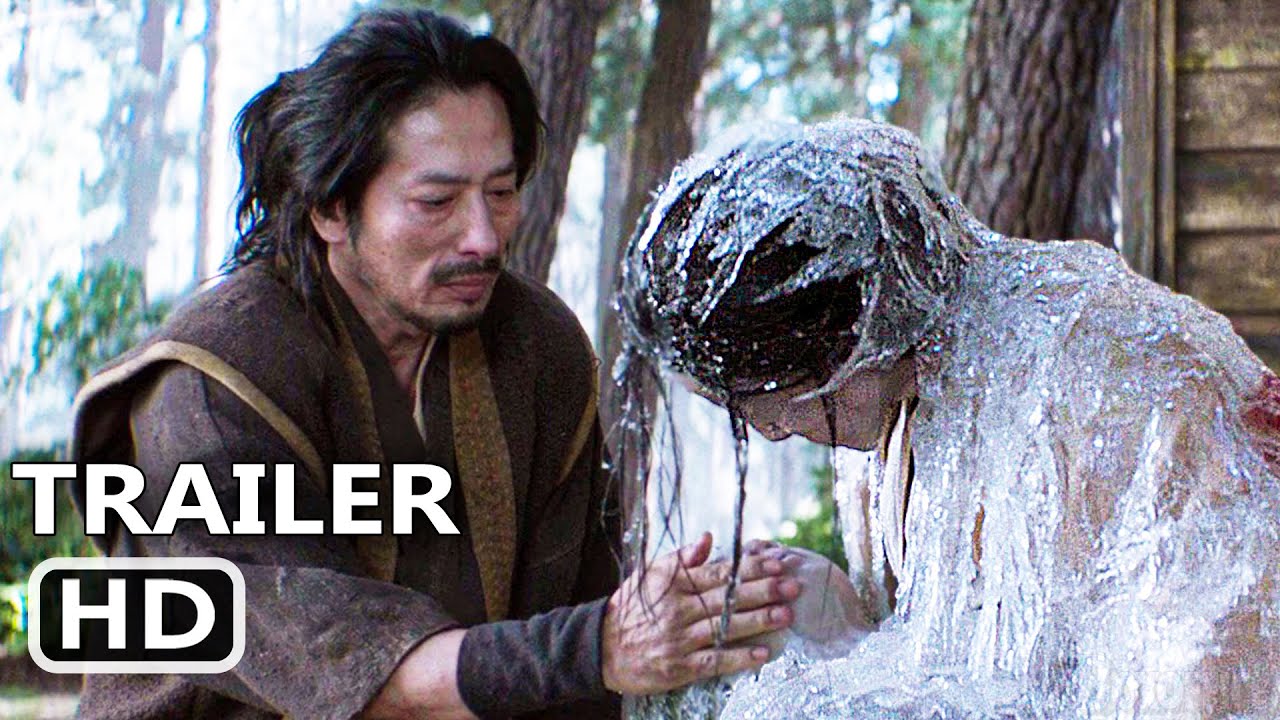 RIGHT HERE BELOW YOU CAN ENJOY THE FIRST 8 MINS OF THE MOVIE! (CONTAINS SPOILERS!) In "Mortal Kombat," MMA fighter Cole Young, accustomed to taking a beating for money, is unaware of his heritage--or why Outworld's Emperor Shang Tsung has sent his best warrior, Sub-Zero, an otherworldly Cryomancer, to hunt Cole down. Fearing for his family's safety, Cole goes in search of Sonya Blade at the direction of Jax, a Special Forces Major who bears the same strange dragon marking Col
PROMOTIONS!

RYAN MURPHY DECIDES TO DO AN AMERICAN HORROR STORY RECOUNT!

Ryan Murphy is asking fans to weigh in on the Future of AMERICAN HORROR STORY! American Horror Story creator Ryan Murphy asked fans to vote on future storylines. The original choices were: X-mas horror,aliens , Sirens,bloody mary, Piggy Man, or the Plague! Those themes were whittled down to Aliens, Bloody Mary, Sirens, and Plague. A few days ago, Murphy revealed the final two picks: AHS: Bloody Mary and AHS: Plague AHS had such a high demand on a recount that ryan murphy
PROMOTIONS!

Genre:Mystery And Thriller Original Language:English Director:Damian Mc Carthy Producer:Justin Hyne Writer:Damian Mc Carthy Runtime:1h 28m A lone drifter, Isaac suffering from partial memory loss accepts a job from his old landlord Barrett, to look after his niece Olga, a psychologically troubled woman living in an abandoned house on an isolated island. When Barrett convinces Isaac to confine his movements to the house and leaves the two of them alone, a game of cat and mouse
PROMOTIONS!

One of his first special FX roles was as make-up artist for Joe D'Amato, whose film Emanuelle in America required detailed special FX for the notorious snuff film sequences. De Rossi prepared several gruesome effects for the film reels, which were played as part of the narrative; the effects included a woman's breasts being hacked off, multiple floggings, burning with acid and pokers and shootings. The FX were so convincing, many thought them real snuff film scenes, also an a
PROMOTIONS!

Coming Soon Releases April 23, 2021 SYNOPSIS: Grey is an indie singer who is having visions that she is a wolf. When she gets an invitation to work with notorious music producer Vaughn Daniels at his remote studio in the woods she begins to find out who she really is.
PROMOTIONS!

Director: Haruo Sotozaki Writer: Koyoharu Gotouge (comic "Kimetsu no yaiba") (as Gotôge Koyoharu) Stars:Natsuki Hanae, Akari Kitô, Yoshitsugu Matsuoka synopsis: After his family was brutally murdered and his sister turned into a demon, Tanjiro Kamado's journey as a demon slayer began. Tanjiro and his comrades embark on a new mission aboard the Mugen Train, on track to despair.
PROMOTIONS!

After a long year of gloom and doom at the box office, the Easter holiday weekend finally offered a giant ray of hope for movie theaters thanks to two of cinema’s most iconic characters. Godzilla vs. Kong, Warner Bros.’ big-budget kaiju grudge match, smashed pandemic-era records left and right in North America: The PG-13 extravaganza opened in the largest number of theaters since the COVID-19 outbreak (3,064); it had the largest opening day during that period ($9.6 million on
PROMOTIONS!

BEHIND THE SCENES OF MORTAL KOMBAT!

EXCLUSIVE BTS VIDEO! Producer James Wan and director Simon McQuoid’s Mortal Kombat hits theaters and also HBO Max next month. Originally slated for an April 16th release, teh film is now coming out on April 23rd. Synopsis: MMA fighter Cole Young is used to getting beaten for money. But he’s unaware of his legacy. Or that Emperor Outworld Shang Tsung sent his best warrior, Sub- Zero, an otherworldly Cryomancer, to hunt Cole. He fears for the safety of his family. So he seeks a
PROMOTIONS!

A new five-part docuseries Pray, Obey, Kill will premiere on HBO beginning April 12th. And today we have the killer trailer and poster for you guys to take a look at. On a cold night in January 2004, gunshots rang out across a remote Swedish village. In Knutby, home to a small, tight-knit Pentecostal congregation, a young woman was murdered in her bed. And her neighbor suffered from multiple bullet wounds. Attention soon turned towards the community. The victim’s husband, als
PROMOTIONS!

Mego Figures Are Now Relaunching with 8″ Regan from THE EXORCIST!

There are over 1,100 tunnels in Norway without emergency exits. Let that though sink in for a second. Fans of disaster horror will want to check out The Tunnel when it arrives on April 9th from Samuel Goldwyn Films. Today, Dread Central is thrilled to share an exclusive (and exceptionally tense) clip from the film! by josh millican Synopsis: A tank truck crashes in a tunnel in the ice-cold Norwegian mountains, brutally trapping families, teenagers, and tourists on their way h
PROMOTIONS!

THE COLLECTED Has Been Abandoned

THE COLLECTOR 3 aka THE COLLECTED has been abandoned after shooting 8 days, 2 years ago! Marcus Dunstan and Patrick Melton have set the record straight on The Collected (aka The Collector 3), revealing that the anticipated horror sequel has gotten stuck in development hell. Previously, there have been reports of The Collector and The Collection getting another installment of the franchise with director Dunstan and co-writer Melton back on board. Randy Havens, Dot-marie Jones,
{"items":["608025af90ff0200578665ce","60801f5d0cf9c4001577f1d2","60790bc9bd22e30057664fd8","6074a1c17faa9e001560a126","60749f869dafca00de2c4212","606bdd49706ce90015fef1cb","606bdc089973750015faf017","606bda81a4fc510015099bd4","606bd98d8d2fd70016c268c1","606bd8259973750015faeda3","606bd70d854a5f001569e044","606bd4c8ba23cc00166097e2","606bd0742ebb2c0015e5a313"],"styles":{"galleryType":"Columns","groupSize":1,"showArrows":true,"cubeImages":true,"cubeType":"fill","cubeRatio":1.3333333333333333,"isVertical":true,"gallerySize":30,"collageAmount":0,"collageDensity":0,"groupTypes":"1","oneRow":false,"imageMargin":32,"galleryMargin":0,"scatter":0,"rotatingScatter":"","chooseBestGroup":true,"smartCrop":false,"hasThumbnails":false,"enableScroll":true,"isGrid":true,"isSlider":false,"isColumns":false,"isSlideshow":false,"cropOnlyFill":false,"fixedColumns":0,"enableInfiniteScroll":true,"isRTL":false,"minItemSize":50,"rotatingGroupTypes":"","rotatingCropRatios":"","columnWidths":"","gallerySliderImageRatio":1.7777777777777777,"numberOfImagesPerRow":3,"numberOfImagesPerCol":1,"groupsPerStrip":0,"borderRadius":0,"boxShadow":0,"gridStyle":0,"mobilePanorama":false,"placeGroupsLtr":true,"viewMode":"preview","thumbnailSpacings":4,"galleryThumbnailsAlignment":"bottom","isMasonry":false,"isAutoSlideshow":false,"slideshowLoop":false,"autoSlideshowInterval":4,"bottomInfoHeight":0,"titlePlacement":"SHOW_BELOW","galleryTextAlign":"center","scrollSnap":false,"itemClick":"nothing","fullscreen":true,"videoPlay":"hover","scrollAnimation":"NO_EFFECT","slideAnimation":"SCROLL","scrollDirection":0,"scrollDuration":400,"overlayAnimation":"FADE_IN","arrowsPosition":0,"arrowsSize":23,"watermarkOpacity":40,"watermarkSize":40,"useWatermark":true,"watermarkDock":{"top":"auto","left":"auto","right":0,"bottom":0,"transform":"translate3d(0,0,0)"},"loadMoreAmount":"all","defaultShowInfoExpand":1,"allowLinkExpand":true,"expandInfoPosition":0,"allowFullscreenExpand":true,"fullscreenLoop":false,"galleryAlignExpand":"left","addToCartBorderWidth":1,"addToCartButtonText":"","slideshowInfoSize":200,"playButtonForAutoSlideShow":false,"allowSlideshowCounter":false,"hoveringBehaviour":"NEVER_SHOW","thumbnailSize":120,"magicLayoutSeed":1,"imageHoverAnimation":"NO_EFFECT","imagePlacementAnimation":"NO_EFFECT","calculateTextBoxWidthMode":"PERCENT","textBoxHeight":350,"textBoxWidth":200,"textBoxWidthPercent":50,"textImageSpace":10,"textBoxBorderRadius":0,"textBoxBorderWidth":0,"loadMoreButtonText":"","loadMoreButtonBorderWidth":1,"loadMoreButtonBorderRadius":0,"imageInfoType":"ATTACHED_BACKGROUND","itemBorderWidth":1,"itemBorderRadius":0,"itemEnableShadow":false,"itemShadowBlur":20,"itemShadowDirection":135,"itemShadowSize":10,"imageLoadingMode":"BLUR","expandAnimation":"NO_EFFECT","imageQuality":90,"usmToggle":false,"usm_a":0,"usm_r":0,"usm_t":0,"videoSound":false,"videoSpeed":"1","videoLoop":true,"jsonStyleParams":"","gallerySizeType":"px","gallerySizePx":292,"allowTitle":true,"allowContextMenu":true,"textsHorizontalPadding":-30,"itemBorderColor":{"value":"rgb(156, 156, 156)"},"showVideoPlayButton":true,"galleryLayout":2,"calculateTextBoxHeightMode":"MANUAL","textsVerticalPadding":-15,"targetItemSize":292,"selectedLayout":"2|bottom|1|fill|true|0|true","layoutsVersion":2,"selectedLayoutV2":2,"isSlideshowFont":true,"externalInfoHeight":350,"externalInfoWidth":0},"container":{"width":940,"galleryWidth":972,"galleryHeight":0,"scrollBase":0,"height":null}}